023: The Courage to Expand What is Possible 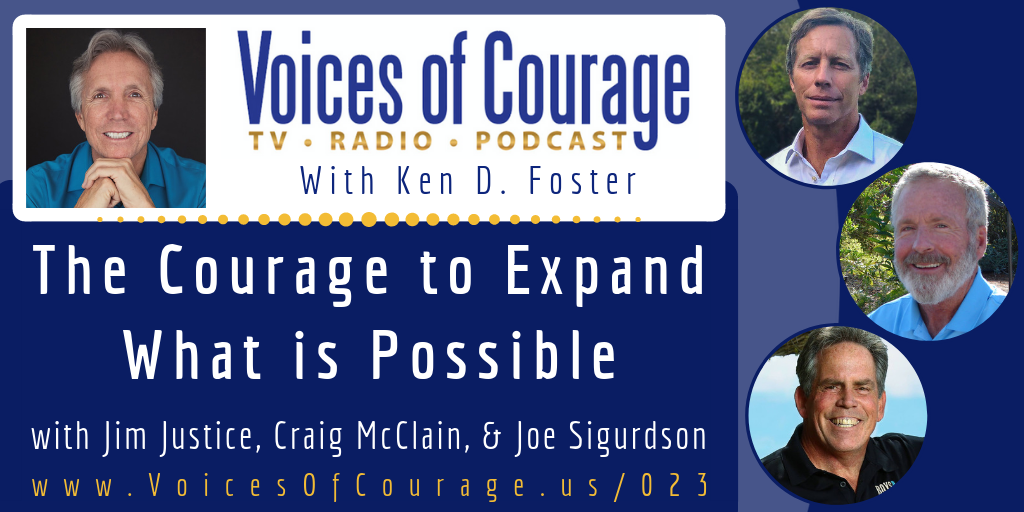 Today we discuss how to reprogram our thinking, adjust our point of view, and generate a compelling future that’s bigger and brighter than we’ve ever dreamed possible.

When it comes to expanding what’s possible in our lives, the first and most important step in the right direction is changing our point of view. But, how do we actually do that? In my own life, I’ve learned that being of service to others will significantly shift our focus.

Our lives become less about ourselves and more devoted towards how we can really contribute and make a difference in other people’s lives. My guests today are three amazing men who are really bringing positive change to the world in all that they do!

My first guest, Jim Justice, is someone that has really inspired me and helped change the way that I deliver my message in the world. Through his personal journey of entrepreneurship, he discovered a parallel path of pursuing his spiritual truth. This journey has led Jim to co-found an amazing app called The Vibe, which serves as a daily dose of mindfulness and guidance helping individuals live a balanced and fulfilled life.

My next guests, Craig McClain and Joe Sigurdson, have co-founded an organization called Boys to Men Mentoring, which is helping to change the world through the care and support of our younger generation. Craig and Joe share how their non-profit organization is committed to creating communities of dedicated men who are able to guide and support at-risk, often fatherless, boys on their journey to manhood.

“Being comfortable with a new perspective that is more aligned with who you want to be and how you see the world is going to benefit you and people around you.”  –  Jim Justice

Jim Justice is a consummate entrepreneur, dropping out of college to found his first company, Justice Communications, at the age of 20.

Since then, Jim has founded numerous companies spanning consumer products and technology including Grateful Pet, iPIN (now owned by Intel), and TouchHealth, Inc., a communication platform for small medical practices.

Jim ultimately earned a B.S. in Economics from Virginia Commonwealth University, an MBA from Kenan-Flagler (at University of North Carolina – Chapel Hill).

He has been awarded several U.S. patents in electronic payments and secured messaging.

Throughout the bumpy ride of entrepreneurship, Jim discovered a parallel path pursuing his spiritual truth.

In 2016, he attended the Academy of Intuition Medicine in Sausalito, CA where he studied various intuitive and energetic systems along with an exploration of the human state of consciousness.

In 2017, along with Steve Sekhon, Jarl Foresman, and Bill Gladstone, Jim founded Gratitude publications to build and market the Vibe mobile app.

The idea to create a platform for daily guidance from thought leaders in mindfulness and spirituality has since blossomed, and the Vibe serves as a ‘go-to’ source for a daily dose of mindfulness for those living in a busy world.

“The courage to tell the truth is really what we’re talking about, and if we can teach that to our younger generation and not just the one’s that are disconnected, but to all of them, then we’re going to change the world.”  –  Craig McClain

Craig McClain grew up in a middle class Midwestern family. He is the father of two children, a foster parent, and soon to be a grandfather.

At 45, he attended an intense men’s training that changed his life. This weekend training challenged him to examine his self-limiting belief systems he formed during his difficult teenage years.

Craig’s commitment to service, and his empathy for others exploded. He knew this training should be done for teenagers, not 45-year-old men. He soon found that he was the one that would make this happen.

After doing some research, Craig found many cultures have passages to manhood. He knew he wanted and needed that experience when he was a teenager.

Craig knew that he had found his life mission. He clearly saw the vision of a national program that provides just such an experience. He continues to hold that vision today.

Craig scaled back his successful photography business and started working on forming Boys to Men Mentoring Network. He and Joe Sigurdson put in countless hours and thousands of their own dollars to form a organization that could make this vision a reality.

Their leadership, vision, and integrity have been the momentum behind the success of BTM.  Started in San Diego in 1996, Boys to Men has become a thriving national organization, with chapters in 11 cities.

As Executive Director, Craig has guided the formation and growth of Boys to Men Mentoring Network. He is a ‘visionary’ in the truest sense of the word for the entire organization.

His business experience (20 years of small business ownership), combined with his vision and commitment has been the driving force behind Boys to Men’s innovative program design and successful growth strategy.

Craig is actively involved in the administrative, marketing and fundraising aspects of the organization.

Joe Sigurdson is the co-founder of Boys to Men Mentoring Network.

Joe was a teenage father, and he and his wife of thirty nine years, Nancy, have two children and seven grandchildren.

He is an active member of Alcoholics Anonymous with twenty seven years of sobriety.

Joe has been active in the Mankind Project doing interpersonal work for the past twenty one years.

His experiences in both these programs have given him insight to what he believes is lacking in our society, especially for teenage boys.

Joe has worked with thousands of men and boys around the world. He knows that inside every boy is a desire to be a good man.

Boys to Men has developed their approach to helping boys become better men by listening accepting and admiring them for who they are. These principles are the result of Joe’s path through life and recovery.

“When we tell the truth, we set that sacredness in the circle that says this is a safe place and it give the boys permission for them to open up and talk about the choices they’re making right now and the price they’re paying for those choices right now.”  –  Joe Sigurdson